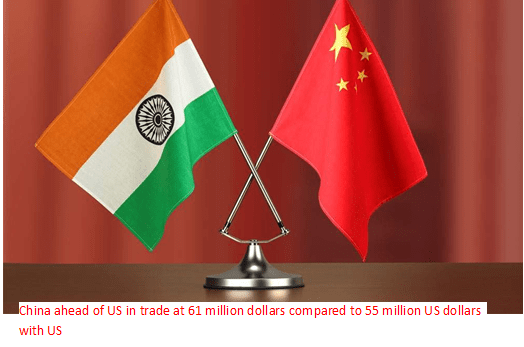 Notwithstanding the cold war between India and China for the last eight months over border dispute in Eastern Laadakh, Beijing continues to New Delhi's leading trade partner in 2020 replacing United States according to figures provided by the Commerce Department.

The provisional data of the department for the current financial year from April to December however revealed that China is ahead of United States in trade at 61 million dollars compared to 55 million us dollars with the United States. The trade with US fell because of the unilateral withdrawal of the duty concessions by the Trump administration and the impact of covid

China has achieved this feat despite dozens of China-linked apps were banned, a major infrastructure contract awarded to a Chinese firm was cancelled, and the import of certain kinds of power equipment was banned. Production-linked incentive (PLI) schemes were announced across sectors to reduce dependence on critical goods from China, even though building self-reliance in these critical sectors will likely take several years.