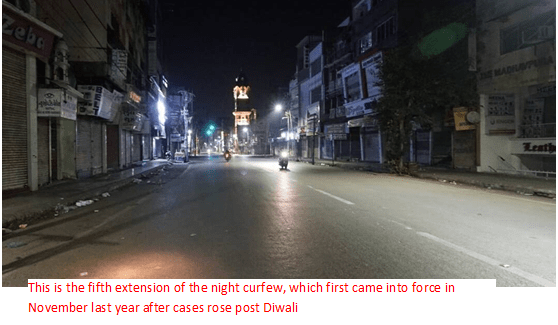 This is the fifth extension of the night curfew

This is the fifth extension of the night curfew, which first came into force in November last year after cases rose post Diwali

The government has decided to extend the night curfew by another 15 days in view of the recent rise in coronavirus cases in four municipal corporations an official statement issued after a high level meeting to review the sitution. The meeting was presided over by the state chief minister Vijay Rupani . The meeting also took note of increase in incidence of corona virus in neighbouring states of Maharashtra and Madhya pradesh..

The ongoing night curfew starts at midnight and ends at 6 am. Although the statement about the extended night curfew does not mention the time, the existing schedule is likely to continue.

In view of increasing COVID-19 cases, the government has decided to expedite the vaccination drive, the statement said.

The second dose of COVID-19 vaccine has been given to 1.23 lakh healthcare workers till now, it said.

In terms of vaccination Gujarat ranks first in the country

The health department claimed that Gujarat ranks first in the country in terms of vaccination per million population. The state has so far received 15.70 lakh doses of Covishield, and 4.83 lakh Covaxin.

The vaccination drive for senior citizens and those with co-morbidities will begin from March 1 as per the Centre's instructions, it said.