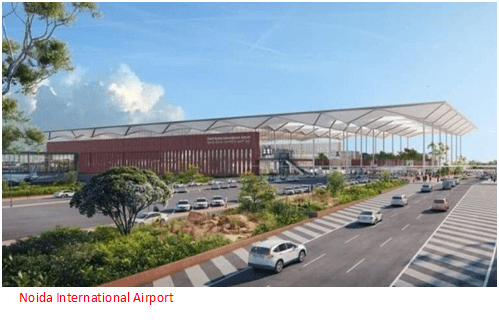 The proposed NOIDA airport will have six air strips

As many as six airstrips will be constructed at the Mega Noida International Greenfield airport and the Uttar Pradesh government has allotted a sum of rs 2000 crores for the project. An electronic city is also set up near the airport at a cost of rs 2000 crores

The largest airport in the country is being built there at a cost of rs 30,000 crores.

The entire construction will take place in four phases and Switzerland’s Zurich Airport International AG has won the contract to build the proposed airport in Noida, on the outskirts of Delhi.

The Noida airport at Jewar will inject jet fuel in the regional economy of the area.

Already manufacturing companies are actively considering the Yamuna expressway area because of the upcoming airport. Warehousing companies will follow, according to a spokesman of the real estate body” CREDAI.

Meanwhile, in a push for infrastructural development, the government allocated Rs 5000 crore for acquiring land for the “Ganga Expressway project” – from Meerut to Allahabad – from the funds raised from monetisation of toll collection of Agra-Lucknow Expressway. The Budget also set aside Rs 1,107 crore for the Purvanchal Expressway, Rs 1,492 crore for the Bundelkhand Expressway and Rs 860 crore for the Gorakhpur link Expressway.