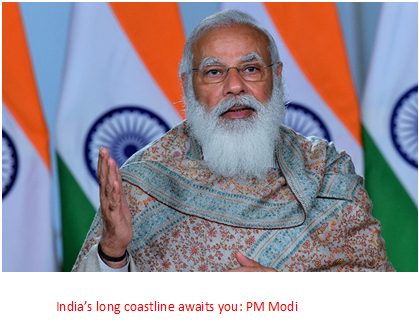 The Central Government has decided to develop Mega Ports with World Class Infrastructure in Kandla (Deendayal) in Gujarat, Greenfield port Vadhavan near Maharashtra Gujarat border and Paradip port in Odissa, Prime Minister Narendra Modi announced . He however did not spell out the size, cargo handling capacity and the infrastructure facilities to be created in these mega ports.

The Government is in the process of installing solar and wind-based power systems at all the major ports across the country and aims to increase usage of renewable energy to more than 60 per cent of total energy by 2030 in three phases across Indian ports.

World invited to be a part of India’s growth trajectory

Speaking on the occasion, the Prime Minister invited the world to come to India and be a part of India’s growth trajectory. India is very serious about growing in the maritime sector and emerging as a leading Blue Economy of the world. Through the focus areas of upgradation of infrastructure, boosting reform journey, India aims to strengthen the vision of Aatamnirbhar Bharat,  he said.

A list of 400 investable projects by Ministry of Port, Shipping and Waterways

The Prime Minister informed that the Ministry of Port Shipping and Waterways has created a list of 400 investable  projects. These projects have an investment potential of $ 31 billion or Rs 2.25 lakh crores. Talking about the Maritime  India Vision 2030, Prime Minister said It outlines the priorities of the Government.

Indian ports now have measures such as: Direct port Delivery, Direct Port Entry and an upgraded Port Community System (PCS) for easy data flow. Our ports have reduced waiting time for inbound and outbound cargo. Instead of a piecemeal approach focus is on the entire sector as one, he said

To develop tourism adjacent to lighthouses

He also pointed out that India has as many as 189 lighthouses across its vast coastline. “We have drawn up a programme for developing tourism in the land adjacent to 78 lighthouses. The key objective of this initiative is to enhance development of the existing lighthouses and its surrounding areas into unique maritime tourism landmarks”,

The Government of India is also focusing on the domestic ship building and ship repair market. To encourage domestic shipbuilding approval has been given to the Shipbuilding Financial Assistance Policy for Indian Shipyards.

The Sagar-Manthan: Mercantile  Marine  Domain Awareness Centre has also been launched today. It is an information system for enhancing maritime  safety, search and rescue capabilities, security and marine environment protection.

Ship repair clusters to be developed by 2022

Ship repair clusters will be developed along both coasts by 2022. Domestic ship recycling industry will also be promoted to create 'Wealth from Waste'. India has enacted Recycling of Ships Act, 2019 and agreed to the Hong Kong International Convention. He added that the Government is keen to promote the use of renewable energy in the maritime sector.

The Prime Minister concluded with exhortation to the global investors “India’s long coastline awaits you. India’s hardworking people await you. Invest in our ports. Invest in our people. Let India be your preferred trade destination. Let Indian ports be your port of call for trade and commerce.”