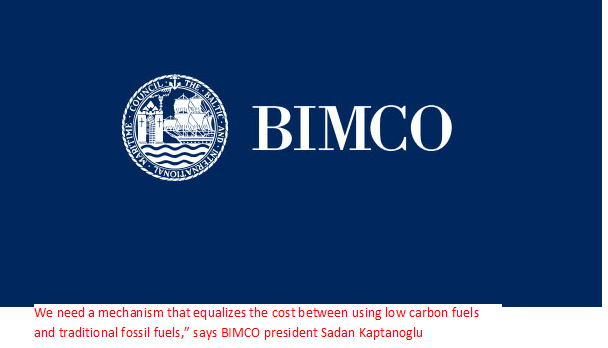 “One way we can make the current low emission technologies competitive with traditional fuels is through some form of market-based measure. We need a mechanism that equalizes the cost between using low carbon fuels and traditional fossil fuels,” says BIMCO president Sadan Kaptanoglu.

BIMCO would like to stress that market-based measures for shipping should be governed by global rules, as it is critical that the industry is not required to pay for its carbon emissions multiple times. This is relevant if market-based measures are being implemented regionally as, for example,  has been announced by the European Commission.

Market-based measure, a rule or legal framework that encourages a desired behaviour through financial incentives

A market-based measure can be described as a rule or legal framework that encourages a desired behaviour through financial incentives. In this case, the shipping industry should be encouraged to use low carbon or zero carbon fuels to limit CO2 emissions. But as long as using traditional fuels is dramatically cheaper, it will discourage the up-take of low carbon fuels and put the first moving companies at a significant competitive disadvantage.

“Equalizing the cost can also spur on innovation, because the potential market grows, and speed up the installation of the required infrastructure,” Kaptanoglu says.

IMO a good platform for the debate

The International Maritime Organization is a good platform for the debate on a ruleset, according to Kaptanoglu, but it is critical that the debate begins now, in order for the industry to make the transition in time to reach our CO2 reduction targets.

The support for some form of globally regulated market-based measures was debated and agreed at BIMCO’s board of directors meeting in late January 2021.