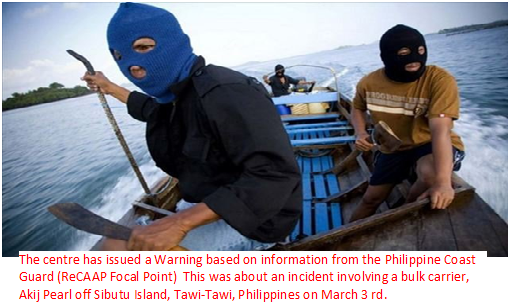 Piracy alert on waters near Sibutu islands off Easter Sabah

The centre has issued a Warning based on information from the Philippine Coast Guard (ReCAAP Focal Point)  This was about an incident involving a bulk carrier, Akij Pearl off Sibutu Island, Tawi-Tawi, Philippines on March 3 rd.

While the bulk carrier was underway, an unidentified speed boat with three perpetrators on board attempted to board the ship. The master reported the incident to the Philippine Navy Littoral Monitoring Station (LMS). There was no mention if the perpetrators were armed.

This information is to provide maritime situational awareness for mariners operating in the area.