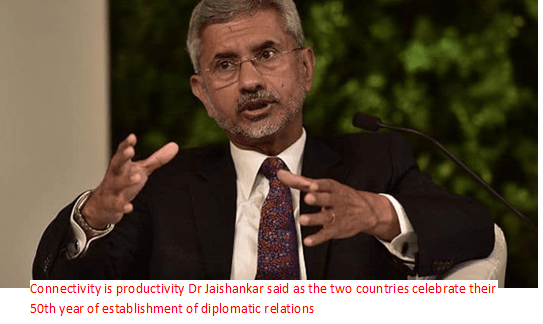 India has asked Bangladesh to accept Japanese technology to improve connectivity between the two countries.

If Right connectivity between India and B’desh, geo-economy of the region will change

If we can get connectivity right between India and Bangladesh, I can tell you the entire geo-economy of the region will change. The Bay of Bengal will look very different." said External Affairs Minister Dr S Jaishankar said while emerging from a meeting with his Bangladesh counterpart AK Abdul Momen at the state guest house at Dhaka on March Fourth

"Connectivity is productivity  Dr Jaishankar said as the two countries celebrate their 50th year of establishment of diplomatic relations. Bangladesh and India are looking forward to stronger connectivity between the two countries and with South Asia and beyond in the next 20 years.

At a joint press conference after the meeting, Jaishankar said they spoke about involving a third country, preferably Japan, which is a very good friend of Bangladesh and India, in terms of connectivity. Japan is already involved in a number of major connectivity projects in the Bay of Bengal under the Bengal Industrial Growth Belt.

"Our relations transcend orthodox partnerships, and I believe our bonding is central to the realisation of the dream of a peaceful, prosperous and progressive South Asia," he said.

The purpose of Jaishankar's visit is to prepare the groundwork for Indian Prime Minister Narendra Modi's visit to Bangladesh on March 26-27. It will be the Indian premier's first travel outside India since the coronavirus pandemic as well as his second as PM to Bangladesh. Modi virtually held a meeting with his Bangladesh counterpart on December 17 last year.

Jaishankar, who arrived in Dhaka in the morning of March fourth called on Prime Minister Sheikh Hasina and inaugurated a branch of India's Cultural Centre in Gulshan before flying back to Delhi late at night.