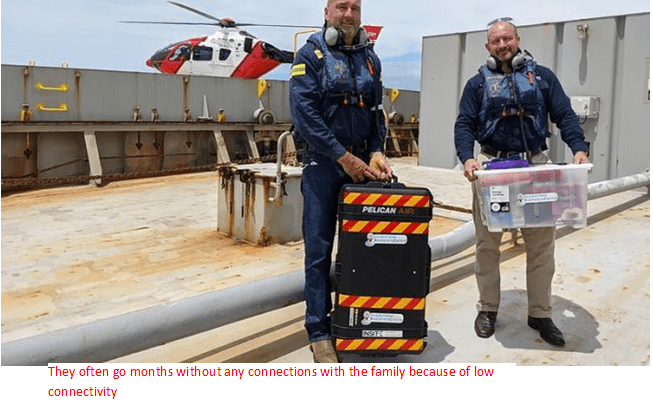 Seafarers stuck on ships are always looking for ways to communicate with their friends and families. They often go months without any connections with the family because of low connectivity. They can only connect with their families once they come to port. To remedy this the first WiFi for international sailors onboard ships have been launched.

The situation got even more problematic in the pandemic as seafarers couldn’t get to port because of COVID restrictions.

An Australian tech company has come to the rescue of seafarers by conducting trials of WiFi on cargo ships in the middle of the sea. The WiFi was launched onboard a cargo shipsof Gladstone Port in Australia. The ships were 20kms away from ports and shore.

A joint project has been launched for this purpose which will eventually help to enhance seafarers wellbeing and welfare. The company is planning to further expand the project to other ports and remote communities

According to Jessica Mulhall, the Gladstone manager of Mission To Seafarers, this initiative is crucial for seafarers as they are deprived of internet access on the high seas because of extremely high prepaid cost. The prepaid service cost at sea is quite high which the seafarers can’t afford at their wages.

“The second they were able to access their phones they all stepped outside to have that private moment with their families and speak to them,” she said.

Craig Walker, the Gladstone Ports Corporation (GPC) who was present on the first trial of the device echoed similar sentiments.

“When we turned it on we saw the excitement in some of their faces. One of the first crew members that I saw looked at a little video of his daughter and his face lit up, and he was showing his crewmates”, Walker said.