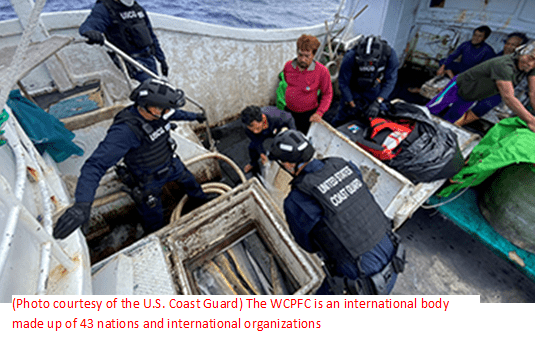 The Kimball is one of the newest national security cutters to be home-ported in Hawaii. With a top speed in excess of 28 knots and a range of 12,000 nautical miles, it can maintain patrols up to 90 days, carrying a crew of up to 150.

The Kimball deployment was part of Operation Blue Pacific, which has the mission of maintaining stability and security throughout the Indo-Pacific region. The crew is trained in “targeted and intelligence-driven enforcement actions as well as counter predatory irresponsible maritime behavior,” according to the Coast Guard.

The WCPFC is an international body made up of 43 nations and international organizations. Members agree to allow the 13 countries in the pact to board and record any potential violations on their nationally-flagged vessels. The findings go to the WCPFC, which notifies the vessel's flag-state of the suspected infraction for further investigation.

The ongoing presence of a Coast Guard cutter WCPFC demonstrates the U.S. commitment to the region

“Our presence in the area shows our partners the Coast Guard’s enduring efforts to provide search and rescue response and oversight of important economic resources,” Lieutenant Commander Drew Cavanagh, who serves as operations officer for the Kimball, said. “The ongoing presence of a Coast Guard cutter in this part of the Pacific to assist in determining compliance with conservation management measures established by the WCPFC demonstrates the U.S. commitment to the region and our partners."

It combats illegal fishing and other maritime threats

According to the Coast Guard, it “combats illegal fishing and other maritime threats across the Pacific to protect the United States and Pacific Island countries’ resource security and sovereignty.”

“Combating illegal fishing is part of promoting maritime governance and a rules-based international order that is essential to a free and open Oceania,” it said.

While on patrol, the Kimball briefly diverted to assist in a search-and-rescue case in the Federated States of Micronesia, utilizing a small, unmanned aircraft system, or sUAS. The drone “expands maritime domain awareness and provides persistent airborne surveillance on maritime hazards, threats, and rescue operations,” the Coast Guard said.