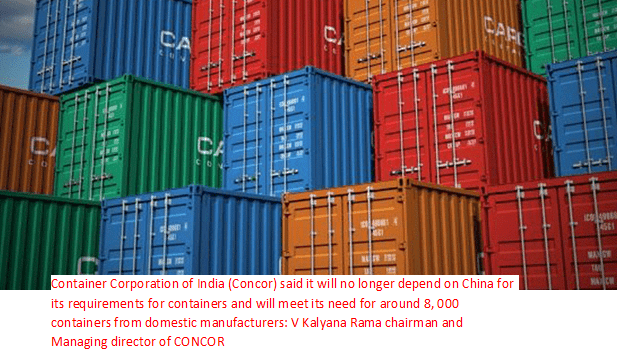 While the Global shipping industry which is facing acute shortage of containers used in transport of goods in ships for the past one year, the indian industry broke a good news that it can manufacture them at 30 per cent less cost than the one manufactured in China, which currently enjoys a near monopoly in the international market.

Currently, there is a cost difference of about 25-30 per cent in containers made in India and abroad. “We need to see how we can reduce the cost of production to compete globally, Chairman of the container corporation of India V Kalyana Rama  chairman and Managing director of CONCOR told a news conference.

He said Container Corporation of India (Concor) said it will no longer depend on China for its requirements for containers and will meet its need for around 8, 000 containers from domestic manufacturers.

As of now there is no manufacturing capability in India

“As of now, all containers are imported because there is no manufacturing capability in India. We want to push India as a manufacturing hub for containers… Our requirement is 8,000 containers every year for the next five years. This is enough to support the start of manufacturing in India.

Concor, which spends about  Rs 200 crore annually on procurement of containers, has already given a developmental order for 1,000 containers each to Bharat Heavy Electricals (BHEL) and Braithwaite & Co -- both public sector undertakings. Concor said it will soon issue tenders for the remaining 6,000 containers wherein only domestic firms will be able to participate as per certain government rules.

He added that it is important that containers made in India are globally competitive as there is a huge demand for containers in the global market. The two public sector companies BHEL and Braithwaiter are developing prototypes currently and testing results should be out by April.