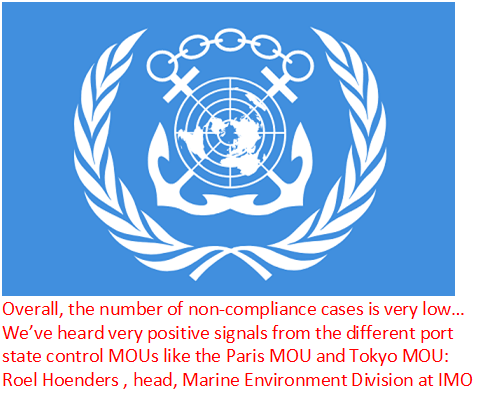 Excellent cooperation and preparation by International Maritime Organization member states, ports and the shipping industry’s fuel providers was key to the successful implementation of the IMO 2020 rule, and has provided a future pathway for impending stricter environmental rules and other changes in international shipping, Roel Hoenders, head air pollution and energy efficiency of the Marine Environment Division at IMO, said.

“Most of those [FONAR] cases were reported in the first six months of 2020 but we actually find very few cases in the last 6-8 months,” Hoenders said on March 23.

Overall, the number of non-compliance cases is very low

Many big ports such as Rotterdam and Singapore have reported a very high level of compliance with respect to the global low sulfur mandate, which was also positive, he said.

In addition, the collapse of global bunker fuel prices in 2020 supported the implementation of the global sulfur cap as the price spread between heavy fuel oil and VLSFO was much lesser than anticipated, Hoenders said.

In the first half of 2020, there was a decline in the number of reported approved “equivalent method” — approved scrubbers or exhaust gas cleaning systems — that were reported to IMO, Hoenders said.

“But actually we’ve seen that number is picking up again,” he said.

The reported EGCS (approved “equivalent method”) by flag states has increased from 2,359 in July 2020 to 3,161 by March 1, 2021, making the business case for scrubbers, amid rising fuel prices, more favorable, Hoenders said.