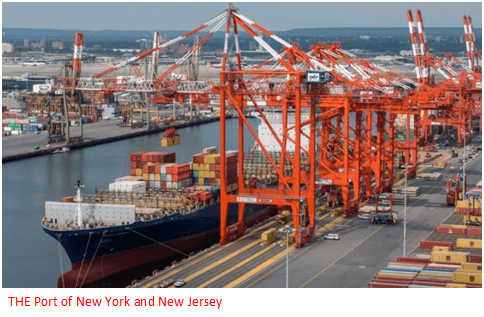 THE Port of New York and New Jersey posted its strongest container throughput on record for the month of February despite a drop in total volumes to a seven-month low, reports London's S&P Global Platts.

The port handled 625,120 TEU in February, an increase of 7.9 per cent year on year, the Port Authority of New York and New Jersey (PANYNJ) said.

Although the port continued its record-breaking throughput trend amid a sustained surge in demand for Asian imports, monthly volumes were the lowest since July 2020 as the shortened month coincided with the Lunar New Year holidays in Asia, which reduced export cargo flows.

Total import volumes at New York and New Jersey rose by 11.2 per cent year on year to 334,176 TEU, but export volumes from the port fell by 16.8 to 232,289 TEU as shipping lines prioritised the swift return of empty containers to Asia over US export cargoes.

Auto volumes at the port proved resilient in February

Auto volumes at the port proved resilient in February with 41,580 units handled, a 10.6 per cent increase from the same month in 2020.

The Port of New York and New Jersey was the third busiest container port in North America in 2020 and the busiest on the East Coast, with a total throughput of 7.59 million TEU in 2020.