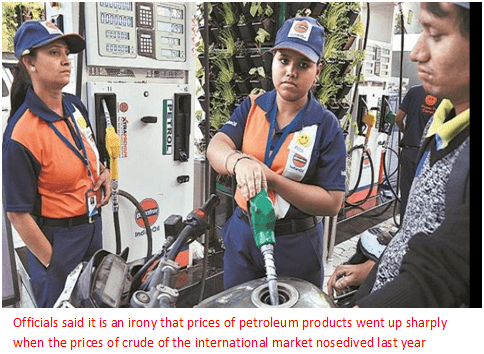 As polling dates for state assembly elections nearing, Petroleum Minister Dharmendra Pradesh has come out with an announcemet that prices of petrol diesel and cooking gas will be brought down further.

State-run oil marketing companies have recently cut petrol, diesel and cooking gas rates, and fuel prices may fall further in the near future, Union petroleum minister Dharmendra Pradhan on  said in Kolkata ahead of the third-phase polling for the assembly elections in West Bengal.

“In last few days, petrol and diesel rates have started falling. We had said earlier that when crude oil prices will fall in the international market, we will pass on the benefit to the consumer... Price of LPG (liquefied petroleum gas or cooking gas) has also started falling. It will fall further in coming days,” Pradhan told reporters.

Officials said it is an irony that prices of petroleum products went up sharply when the prices of crude of the international market nosedived last year. The oil marketing companies are currently being asked to reduce prices when crude prices have started moving up just because there are elections in some states, all in the name of market driven prices.

Brent crude, which was below 60 US dollars a barrel until the first week of February saw a strong rally for over a month to peak at around 70 US dollars per barrel by second week of March due to supply squeeze by the oil producers’ cartel, the Organisation of the Petroleum Exporting Countries and its allies, including Russia. Saudi Arabia leading oil producer rejected India's plea against cut in production and asked India to use the crude which was supplied when the prices touched rock bottom last year.