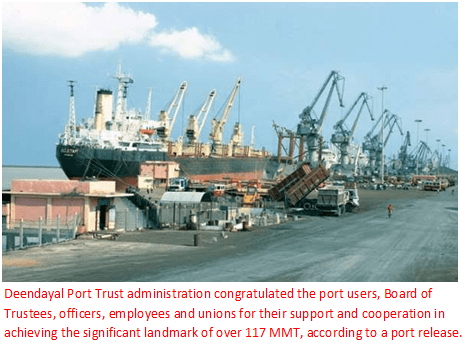 Deendayal Port Trust (Kandla) handled more than 117.5 million metric tonnes (MMT) of cargo during Financial Year 2020-21 despite the  Corona pandemic and two cargo berths taken out of traffic for maintenance for the major part of the financial year. The port had handled 122.61 MMT during FY 2019-20; the decrease between the two years was hardly 5 Million metric tones.

The port administration congratulated the port users, Board of Trustees, officers, employees and unions for their support and cooperation in achieving the significant landmark of over 117 MMT, according to a port release.