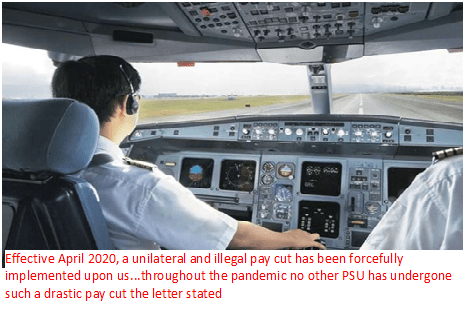 Air India’s Boeing pilots have written to the aviation minister Hardeep Singh Puri seeking an urgent meeting with him. The letter dated March 31 emphasised that Air India group flew over 2.9 million passengers through the pandemic as frontliners, yet since April 2020, an “illegal pay cut” has been forcefully implemented upon them which no other public sector undertaking (PSU) has undergone.

“…effective April 2020, a unilateral and illegal pay cut has been forcefully implemented upon us...throughout the pandemic no other PSU has undergone such a drastic pay cut. Air India awarded a 70% pay cut to the very section of employees who during Covid times reported for duty, putting themselves as well as their near and dear ones at risk of getting infected. At the same time the management gave themselves a paltry 10% cut while effectively being cocooned in the safety of their own homes,” the letter stated.

The pilots had written to their management on March 23 highlighting factors such as the airline management’s decisions to remove pre-flight Covid testing and cancel or curtail pilot leaves. They also questioned the government on not rolling back their pay cuts despite seeing a rise in domestic travel..