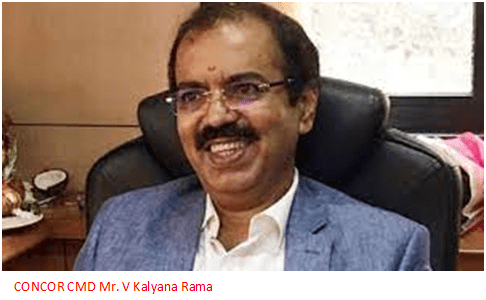 FY 2022 will be a good year as the demand has picked up : CONCOR CMD

CONCOR Chairman and Managing Director (CMD) Mr. V Kalyana Rama, was recently quoted as saying that the company has resolved the land lease issue and made the payment, “The total payment we made is Rs 590 crore to the Indian Railways. All disputes with respect to railways have been settled.”

Rama said CONCOR picked up good volumes in Q4, “Overall for the year we ended up in handling volumes around 2.8 percent less but in domestic, we were more than last year.”

The company is working on the guidance for FY22

Further, he said the company is working on the guidance for FY22, “We hope it will be a good year as the demand has picked up and the forecast from various stakeholders is that the demand will continue like this.”

Ram said CONCOR is seeing good increase in exports, which is a very encouraging scenario.Also, he sees maximum amount of growth in the export-import traffic over the next one-two years,

“For domestic, we are seeing more people are coming towards containerisation.”