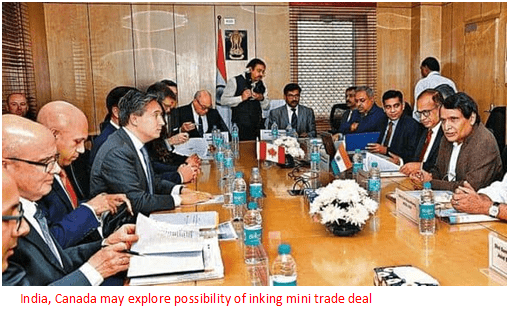 India and Canada may come back to the negotiating table later this month after a gap of almost four years to explore the possibility of signing a mini trade deal.

The two sides have been negotiating a Comprehensive Economic Partnership Agreement (CEPA) since 2010 with the latest round of negotiations held in August 2017.

“We have held several rounds of virtual discussions with the Canadian side since June last year. In October, a bilateral meeting was held to explore the option of an early harvest or interim agreement. In this regard, a scoping paper has been shared with Canadian side. A formal round of negotiations is likely to happen sometime in late April,” a commerce ministry official said under condition of anonymity.

India has been keen to sign mini trade deals with the EU and the UK, but not much headway has been made so far. Most countries are keen to sign comprehensive free trade agreements with India rather than early harvest deals. India’s long drawn negotiations for a mini trade deal with the US also didn’t work out. No dates have been finalized for the talks as yet, an official in the Canadian embassy said under condition of anonymity.