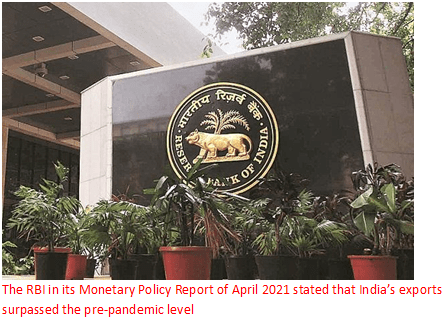 Highlighting the positive momentum in the external demand, the RBI in its Monetary Policy Report of April 2021 stated that India’s exports surpassed the pre-pandemic level and entered the expansionary zone from December 2020. Imports contraction also became softer and eventually turned positive from December 2020 after a gap of 9 months, it said.

As per data released by the Directorate General of Commercial Intelligence and Statistics (DGCI&S), the pace of contraction in India’s merchandise exports, which peaked in Q1 of 2020-21 due to the disruptions caused by the pandemic, moderated in Q2 and Q3 on the back of a gradual recovery in global demand conditions.

Overall, during April-February 2020-21, merchandise exports contracted by 12.2 per cent. In February, exports had risen marginally by 0.67% to $27.93 billion owing to container shortages and limited supply disruptions.

Sharad Kumar Saraf, President, FIEO had said that negative growth in exports of major products such as petroleum products, oil seeds, leather and leather manufactures, cashew, gems and jewellery, electronic goods, fruits and vegetables, engineering goods, tea, coffee and marine products, with major contribution in the country’s exports basket and related to the labour-intensive sector, had been of key concern.

The month of March, incidentally, had brought cheer and hope for the sector as exports showed a whopping double digit growth of almost 58.50 per cent clocking $34 billion compared to March 2020.

The Monetary Policy Report stated that with the gradual opening up of the economy and revival of domestic demand, the pace of contraction in merchandise imports moderated to 4.7 per cent in Q3 of 2020-21 from 52.9 per cent in Q1. In February 2021, merchandise imports rose by 7.0 per cent, registering an expansion for the third consecutive month. The rebound in non-oil non-gold imports has been broad-based, with major sectors including electronic goods, machinery, chemicals, and pearls and precious stones reaching pre-Covid levels in December 2020. “Overall, merchandise imports contracted by 23.1 per cent in April-February 2020-21. With imports contracting faster than exports, the merchandise trade deficit nearly halved to US$ 84.6 billion in April-February 2020-21 from US$151.4 billion in the corresponding period a year ago,” the report highlighted.