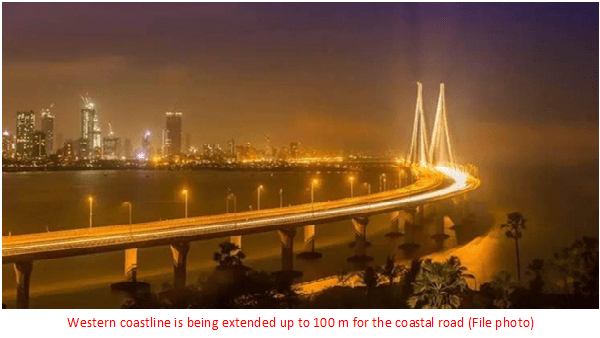 After over two decades, Mumbai has again turned to the Arabian Sea to solve the growing problem of vehicular congestion. Cranes, barges, sand, construction equipment, and scores of labourers are working round the clock on the city’s coastline to fill up the sea to create new land and new roads.

The Brihanmumbai Municipal Corporation (BMC) is extending the city’s western coastline from Marine drive to Worli up to 100 metres inside the sea for the 10.58 km Coastal Road.

Of the 111 hectares area in the Arabian sea, the civic body has completed about 100 hectares.

The Bandra-Versova Sea Link (BVSL), a 17.7 km long sea link, is scheduled for completion by August 2027. Executed by MSRDC, the project is said to pass just 1 km from the shoreline in the western suburbs of the city, holding at least six artisanal fishing villages

Another 21.8 km long sea bridge — the Mumbai Trans Harbour Link — promises to seamlessly connect the island city with Navi Mumbai. However, the creation of new land and sea bridges has left the century-old fishing villages that have fished in the waters around the city’s coastline— Worli Koliwada, Versova village, Mora gaon in Juhu, Khar Danda, Koliwada in Santacruz, Chimbai village in Bandra— in the financial capital dismayed. The fishing community, some of Mumbai’s oldest residents, are against these roads as the project has threatened breeding grounds for fish, and impacted aquatic life.

The construction noise and reclamation has disturbed the fishes

“The impact of the reclamation near the Worli sea face and Haji Ali can be already seen, and the process is not even complete. The construction noise and reclamation has disturbed the fishes. The fish available in the area has gone down by 25 per cent. Now, another sea link is coming up in Khar- Danda area as well, which will further push the fishes away,” said a member of the Koliwada at Worli.

The fishermen have claimed long term impact and loss of livelihood due to the Coastal Road Project. A Central Marine Fisheries Institute (CMFRI) (appointed by the civic body) report — ‘A baseline study on the impact of coastal road on fisheries and fisher livelihood’ of August 2020 — stated that the fishing community “may get temporarily affected during the construction phase”.

Marine life that comes under the Wildlife Protection Act, 1972 identified in the area by marine research division

A Marine Biodiversity report prepared by SagarShakti, the marine research division of the environmental group Vanashakti, with two independent marine experts, had identified sea snails, crabs, oysters, corals, sponges, octopus, sea fans, snappers, mussels, shrimps and rays — some of which are schedule 1 species under — in the 800-meter stretch between Worli Dairy and the start of the Bandra-Worli sea link.

Nitesh Patil, director of Worli Koliwada Nakhwa Vyavsay Sahakari Society (WKNVSS) and spearheading the protest at Cleveland Bunder, said, “The currents are becoming unpredictable with each passing day. We have already lost a few fishing grounds during the construction of the Bandra Worli Sea Link. Noise vibrations from the vehicles passing over the bridge disturb the aquatic life. Now, there is a Coastal Road connector coming up in the area. After this, there are plans to get Sewri Worli connector as well.”