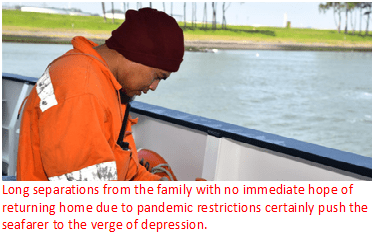 Fear for seafarer's mental health and safety after 14 months: IMO

A fiancé, who had not seen her betrothed for over 14 months due to the COVID-19 pandemic, emailed the IMO’s Seafarer Crisis Action Team (SCAT) on 2 November 2020.

She explained that while port State policy had initially prevented him from signing-off his ship, since August 2020 opaque company procedures had contributed to numerous unsuccessful attempts to repatriate him. Consular and trade union attempts to expedite the process had received similar non-committal responses as those given to the seafarer and his fiancé.

The seafarer raised concerns about his ability to undertake his duties effectively and safely, due to the length of time he had served on board his ship. He also submitted several reports to his company recounting symptoms such as fatigue, depression, inability to concentrate and panic attacks. Increasingly fearful for her fiancé’s mental condition and physical health, and concerned that his state of mind endangered not only him but the entire crew, she contacted SCAT and pleaded for help to get a definitive timeline for his repatriation.

Within two days of receiving the request, SCAT responded to the fiancé and provided the latest guidance on repatriation. It also requested flag, port, and seafarer States, and NGOs in consultative status with IMO, to provide urgent assistance to repatriate the seafarer. A truly international effort ensued, involving excellent coordination and cooperation between multiple agencies in China, Georgia, Indonesia (one for its airport would be used as a stop-over for the multi-leg repatriation flight) and Singapore.     ​

In early December 2020, SCAT received the heartening confirmation that the seafarer, after completing a mandatory quarantine period in the port State, had departed on a repatriation flight.  ​