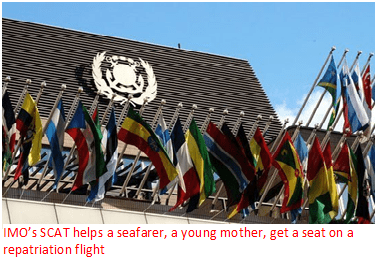 Assisting a young mother during a round-the-world effort to return home: IMO

On 28 October 2020, IMO’s Seafarer Crisis Action Team (SCAT) received an email from a seafarer who recounted an incredible story of endurance and perseverance driven by her desire to return home to loved ones.

The young mother from the Pacific, with eight years seagoing experience, had initially signed on for a three-month trip, but suddenly found her intended way home from the Antarctic blocked by a port State’s decision to suspend international flights as part of its COVID-19 response.

Like many other seafarers, the entire ship’s crew found themselves confined to ship and held at anchor. They made the decision to sail to Europe, despite only having limited provisions aboard. The voyage took 82 days and, after arriving safely, the seafarer then spent four months trying to arrange a repatriation flight.

On the final leg of her journey home the seafarer’s plans were once again thwarted by COVID-19 travel restrictions. While she remained in good health and high spirits, she was desperate to return home – the feeling intensified by how close she was to reaching her goal. At this juncture, after exhausting other avenues, the seafarer contacted SCAT and asked for help.

SCAT immediately reached out to the port and seafarer States and NGOs in consultative status with IMO and asked for their assistance. Within 24 hours, after a concerted effort by its COVID-19 Task Force, the seafarer State’s Alternate Representative to IMO confirmed that the seafarer would be allocated a seat on the next repatriation flight.

On 1 December 2020, after an 11 month around-the-world odyssey, the seafarer was finally reunited with her loved ones. The seafarer emailed her thanks to SCAT and said she was “so thankful to be with my family”. ​