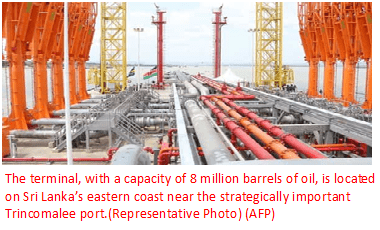 The signing of the agreement came two days after the Sri Lanka's Cabinet approved the proposal submitted by Energy Minister Udaya Gammanpila.

The terminal, with a capacity of 8 million barrels of oil, is located on Sri Lanka’s eastern coast near the strategically important Trincomalee port, which is considered as one of the best natural harbors in the world.

The cost of the terminal redevelopment project was not disclosed.

Under terms of the deal that was negotiated for more than a year, 24 of the 99 tanks at the terminal will be provided to Sri Lanka’s state-owned Ceylon Petroleum Corp.

Another 14 tanks which are currently used by Lanka IOC, a subsidiary of India's state-owned Indian Oil Corporation, will be leased to the same company for 50 years. The remaining 61 tanks will be managed by Trinco Petroleum Terminal Ltd, which is 51% owned by Ceylon Petroleum and 49% by Lanka IOC.

The terminal was built by the British during World War II and it originally had 101 tanks but two were destroyed in a Japanese attack in 1942.

Most of the tanks are in currently disrepair, according to local media reports.

Sri Lanka gained independence from Britain in 1948 but the oil tanks remained British property until the government bought them in 1964.

India considers the Indian Ocean its strategic backyard and is troubled by rival China’s growing economic and political influence over Sri Lanka.

China considers Sri Lanka to be a critical link in its vast “Belt and Road" global infrastructure building initiative. It has provided billions of dollars in loans for Sri Lankan projects over the past decade. The projects include a seaport, airport, port city, highways, and power stations.

Critics have said that the Chinese-funded projects are not financially viable and Sri Lanka will struggle to repay the loans.

In 2017, Sri Lanka leased a Chinese-built port located near busy shipping routes to a Chinese company for 99 years to alleviate the heavy burden of repaying the Chinese loan used to build it.