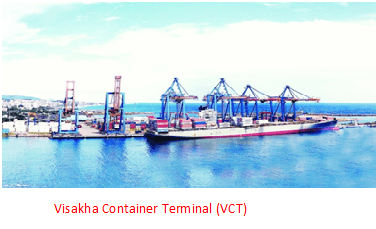 The year 2021 has been remarkable for Visakha Container Terminal (VCT) with the terminal handling 0.5 million TEUs annually. The highest throughput handled in a month was 48,199 TEUs, complemented with record reefer volumes. The terminal witnessed positive growth rate over the previous year, which would not have been possible without the support of its patrons, it emphasised in its latest monthly newsletter.

Rail-bound traffic at VCT was at an all-time high in 2021, with the highest rakes handled in a month being about 75.  Add-on VCT laden exports increased by 6% comparative to the previous financial year despite the container shortage which was a major challenge.

Operational performance has been consistent at the terminal, with improved vessel turnaround time at an average of 21 hours per vessel. Truck turnaround time dropped below 40 minutes, thus reflecting greater efficiency in performance. Ship and crane productivity showcased growth too. The highest parcel size handled was on the vessel m.v. MSC Aldi III: 3,921 TEUs under CVK service in December 2021.

VCT is poised to become a 1.3 million TEUs capacity terminal in 2022

With the trade slowly returning to normal, the laden volumes are increasing and thus parcel size is moving up too. To handle the envisaged container traffic, VCT is moving at a greater pace to complete its expansion project. The extended terminal will be ready soon with additional capacities. VCT is poised to become a 1.3 million TEUs capacity terminal in 2022, with the longest quay of 845 m on the East Coast of India, it highlighted.