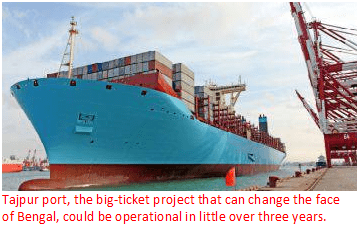 Tajpur port, the big-ticket project of the Mamata Banerjee government that can change the face of Bengal, could be operational in little over three years.

The last date of submission of the final bid for the deep sea port is January 31, 2022. This was disclosed by WBIDC chairman Rajiva Sinha during an interactive session with the members of Merchant’s Chamber of Commerce (MCC) on Tuesday 11 Jan .

Sinha pointed out that a lot of big players have already been in touch with the state government for this. “Some of them have met us as well,” he said.

According to him, the work order for the port may be issued within three months of the closing of bids. “We hope that the port should be ready in 3-3.5 years following the work order,” he added.

Tajpur port will have a stated capacity of 50 million tonne.

Sinha pointed out that Tajpur port will have a stated capacity of 50 million tonne. There has been a pre-bid meeting with prospective bidders earlier on November 21 with the state government.

As per sources, the response was overwhelming as a host of leading port players like Adani Ports, DP World and JSW Infrastructure, Essar Ports, an entity from Singapore and Syama Prasad Mookerjee Port participated in the meeting.

The successful bidder will be given 125 acres of seafront to develop the port and another 1,000 acres of land situated 4 km away for port-linked industrial development.

For the first time, a land swap (of 1000 acres) between WBIDC and the West Bengal State Electricity Distribution Co (WBSEDCL) was done last year in order to make it more attractive for the bidders.

During the meeting, Sinha also said that a single window application gateway would be introduced from WBIDC in the next three months.