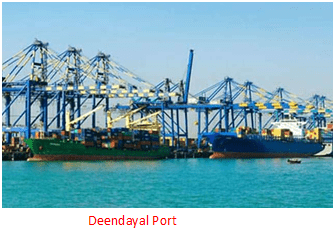 Despite the constraints arising in international trade and shipping due to the ongoing Covid pandemic and the resulting constraints on the cargo handling front, Deendayal Port Trust under Ministry of Ports, Shipping and Waterway, has crossed the 100 MMT milestone on 10.01.2022, and in the process became the 1st Govt. Sector Major Port, to cross the mark in the year 2021-22. Incidentally, in the current fiscal year, DPT has crossed the milestone 4 weeks ahead in comparison of the last fiscal, i.e. FY 2020-21 during which DPT had reached the landmark on 09.02.2021.

Increase was seen in the Import cargoes

The DPT’s cargo throughput growth in the 3rd quarter of current fiscal was the highest among all Govt. Major Ports

The DPT’s cargo throughput growth in the 3rd quarter of current fiscal was the highest among all Govt. Major Ports, with the Port registering 33.52 MMT traffic in the Oct-Dec21 quarter. In the month of December 2021 only, DPT had handled 11.32 MMT cargo which had contributed to about 18% of the total cargo handled by all Major Ports.

Shri S.K. Mehta, Chairman-DPT and Shri Nandeesh Shukla, Dy. Chairman-DPT congratulated the Trustees, Officials, Workers, Trade Unions of DPT, Port Users and Stakeholders for their efforts, initiatives and their continuous support behind reaching this important milestone. The Port’s cargo handling is expected to cross 127 MMT by end of the current fiscal.