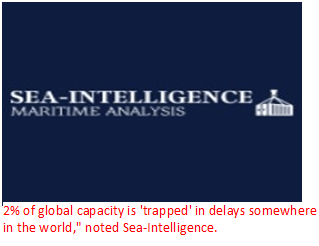 Sea-Intelligence has analysed data from the November 2021 issue of the Global Liner Performance report to calculate how much vessel capacity was being effectively removed from the market due to vessels being tied up on seemingly interminable queues around the world.

Overall, 11.5% of the global capacity has been taken out of the market due to vessel delays in November 2021, a slight improvement from 12.3% in October 2021, according to Danish maritime data analysts.

"However, it seems that there is no sign of imminent improvement, while the normal state of affairs in the market is that 2% of global capacity is 'trapped' in delays somewhere in the world," noted Sea-Intelligence.

2021 was a year where demand grew 7% year-on-year, partly due to the downfall in early 2020, and at the same time capacity effectively was reduced by 11%.

The above figures show the results of Sea-Intelligence's terminal congestion index for North America and Europe.

For Europe, the Danish analysts see a situation that has been steadily getting worse since the start of October, with no signs of any improvement, or even levelling out.

"This also implies that we might well expect to see a continued upwards push on freight rates on this trade, as the congestion is likely to have a negative impact on reliability, and hence in turn on available capacity," commented Alan Murphy, CEO of Sea-Intelligence, who concluded that all the available data show that congestion and bottleneck problems are worsening getting into 2022, and there is no indication of improvements.