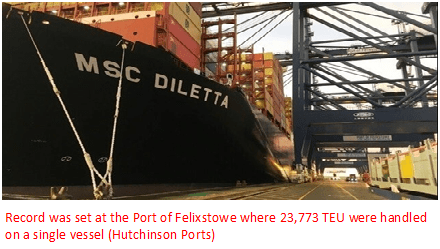 The 228,400 dwt MSC Diletta arrived at the U.K. container port on January 7 and remained on dock until January 12. During the port call, Hutchinson Ports says a total of 23,773 TEU were handled.

Built in 2021, the vessel is part of MSC’s new ultra-large class of containerships with a total rated capacity of 23,964 TEU. Registered in Liberia, the MSC Diletta is 1,211 feet long with a 200-foot beam.

In mid-December, the group announced that they planned to consolidate sailings on this and another route to address the long wait times that vessels had been experiencing at the major ports. Starting in 2022, 2M reported that it would temporarily drop calls at Rotterdam from this route and increase the port time in Felixstowe to handle an increased number of boxes. Similarly, another Far East route will begin omitting calls at Felixstowe increasing its time in Rotterdam.

In announcing the switch in routes, 2M acknowledged that it meant fewer calls in Europe, but said it believed it was the best response to reduce further disruptions across the network. They began shifting bookings between the two routes and were using Yantian in China to transship containers between vessels following the new schedules.

Maersk confirmed that some of its larger vessels were skipping Felixstowe due to long wait times.

Felixstowe said it welcomed the decision by the 2M to consolidate sailings and looked forward to working with the companies during the period of the current high demand for Far East imports to the U.K. Earlier in 2021, Maersk, one of the members of the 2M Alliance, confirmed that some of its larger vessels were skipping Felixstowe due to long wait times. They said that they had begun offloading U.K. bound boxes in the continent’s ports and transshipping them to Felixstowe on feeder vessels.

Hutchinson also highlighted efforts currently underway to further increase the port’s ability to handle the world’s largest container ships. Harwich Haven Authority is dredging the main approach channel to increase the depth from 47.5 feet to 52.5 feet. Work commenced last year and is due to be completed in 2023. The port is also increasing the depth at its deep-water berths. Berth 7 was deepened to 54 feet in 2021 and Berth 6 will also be dredged to 54 feet in 2022.

They also plan to increase the depth to 59 feet at Berths 8&9.