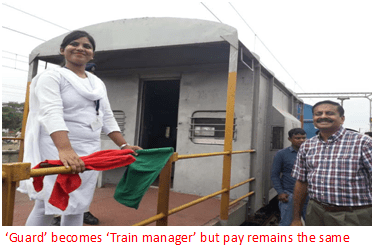 Indian Railways on Friday14 Jan  announced its decision to re-designate the post of ‘guard’ as ‘train manager’, fulfilling a long-pending demand.

The ministry of railways said that the issue of designation had been under deliberation in Railway Board in consultation with recognised federations. The ministry added that the new designation of ‘train manager’ is “more in consonance with their existing duties and responsibilities” and will improve the motivation level of the employees.

The ministry clarified that the pay levels will remain unchanged after redesignation. The method of recruitment, seniority and avenues of promotion will also remain unaffected by the decision.

“The revised designations will not entail any change in their pay levels, method of recruitment, existing duties and responsibilities, seniority and avenues of promotion,” the order stated.