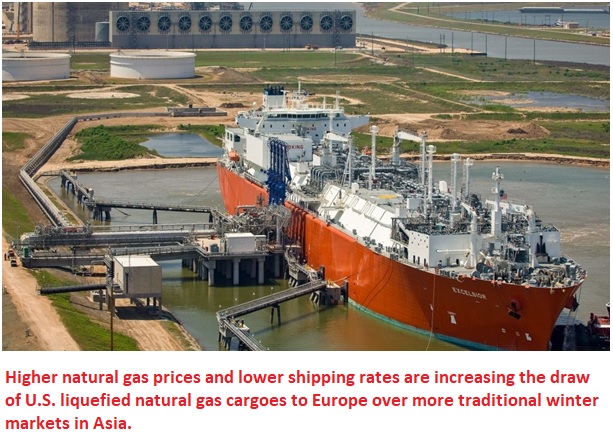 As of Thursday afternoon,13 Jan, there were 41 U.S. LNG cargoes with either declared destinations in Europe or on a likely path to the natural gas-starved continent, compared with 24 heading to Asia, ship-tracking data compiled by Bloomberg show.

The difference of 17 cargoes is the widest so far this winter, which has been marked by volatile gas prices in Europe, where storage inventories are low and major supplier Russia has not delivered as promised.

Last month, benchmark European gas futures were as much as $24 per million British thermal units higher than those in Asia.

The gap has since narrowed significantly, but volatile winter spot prices and shipping rates have tipped to the point in favor of Europe, said David Seduski, an LNG industry analyst with the New York office of Energy Aspects. The firm forecasts that Asia will not begin to draw more U.S. LNG cargoes from Europe until the second quarter of 2022.

“LNG imports have been the saving grace for European supply in the short-term,” Seduski said.

U.S. LNG cargoes to Asia can take more than a month compared to the two-week voyage for most destinations in Europe, shipping data compiled by Bloomberg show. Those shorter distances also result in increased tanker availability.