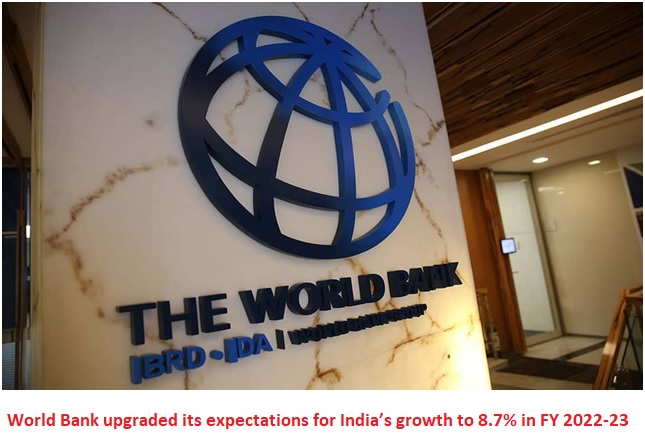 Narendra Modi Government’s Production-Linked Incentive (PLI) Scheme will likely help India’s economy grow at 8.7% in the next financial year 2022-23, beating emerging market peers including China, said the World Bank. In comparison, China, Indonesia and Bangladesh are expected to grow at 5.1%, 5.2% and 6.4% respectively in the emerging market and developing economies.

The World Bank said in its Global Economic Prospects report it has upgraded its expectations for India’s growth to 8.7% in FY 2022-23 and 6.8% in FY 2023-24 “to reflect an improving investment outlook with private investment, particularly manufacturing, benefiting from the Production-Linked Incentive (PLI) Scheme, and increases in infrastructure investment.”

In the wake of COVID-19 pandemic, the Centre launched the PLI scheme with incentives of Rs 1.97 lakh crore over a five-year period for 13 key sectors, to boost production and exports. Government has launched the scheme for sectors such as telecom, electronics, auto parts, advanced batteries, pharmaceutical drugs, and solar energy components.

This incentivising scheme to increase the country’s production

This incentivising scheme in turn is expected to increase the country’s production by $520 billion in the next five years, Prime Minister Modi said last year.

India is expected to add 1.7% in its GDP by 2027 through these schemes spurring new jobs, BNP Paribas Asset Management said in a note.

They could add a substantial 0.3% to annual GDP growth between 2023 and 2027. The direct impact of these schemes is likely to be larger on labour (an estimated 2.8 million new jobs) than on capital spending (estimated at $28 billion). There is likely to be significant upstream activity as a result, driving further gains in jobs and spending,” the note added.

As an emerging economy, India holds potential to tap into the market gap left by China, as the latter recoups itself from supply chain snags and trade war with the United States. “As a stable economy with a host of enabling factors for attracting investments, we believe India is a natural choice in filling the supply chain vacuum the exodus from China has left. Recognising this opportunity, India’s prime minister has laid out his vision of a ‘Self-reliant India’,” BNP Paribas Asset Management said.

The World Bank however gave a positive outlook for India saying investments in India should benefit from the resumption of contact-intensive services, and ongoing but narrowing monetary and fiscal policy support. “The growth outlook will also be supported by ongoing structural reforms, a better-than-expected financial sector recovery, and measures to resolve financial sector challenges despite ongoing risks,” IMF said.

The global economy is entering a pronounced slowdown amid fresh threats

As per the Global Economic Prospects report, following a strong rebound in 2021, the global economy is entering a pronounced slowdown amid fresh threats from COVID variants and a rise in inflation, debt, and income inequality that could endanger the recovery in emerging and developing economies.

For the fiscal year 2021-22 the Washington DC-based institution said it has kept its GDP expectations unchanged at 8.3%.

According to the government’s first advance estimates India released last week, India is expected to grow at 9.2% in comparison to RBI’s forecast of 9.5%.