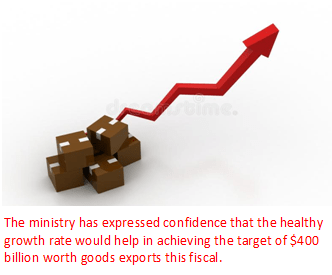 India's exports grew 33.16 per cent to $7.63 billion during January 1-7 period owing to healthy performance by various sectors like engineering, petroleum and gems and jewellery, according to preliminary data released by the Commerce Ministry.

Imports, excluding petroleum, increased in the period under review by 29.88 per cent over the same period of 2020-21, according to the Ministry's data.

The ministry has expressed confidence that the healthy growth rate would help in achieving the target of $400 billion worth goods exports this fiscal.

The country's merchandise exports in December 2021 surged 37 per cent on an annual basis to $37.29 billion, the highest-ever monthly figure.