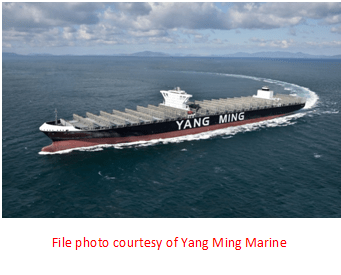 Yang Ming Marine Transport Corp., one of the leading container cargo shippers in Taiwan, has decided to raise year-end bonuses for its employees to the amount equivalent to 12 months of wages on average, and has also decided to raise salaries by an average of 4 percent, after a bumper year that saw a significant rise in shipping rates and profit.

The company had originally planned to give a bonus equivalent to eight months of wages, after the government-invested shipper's employees complained it lagged far behind the 40 months of salaries issued by rival Evergreen Marine Corp., and was too low given that the shipping industry had a very profitable year in 2021 due to growing freight rates.

On Friday, 14 Jan  Yang Ming's board of directors decided to give a higher year-end bonus and a wage hike by 4 percent on average based on performance at a board meeting.

That means its employees can get an average of 13 months of wages as year-end bonuses ahead of the Lunar New Year holiday which is scheduled to start on Jan. 29 this year.