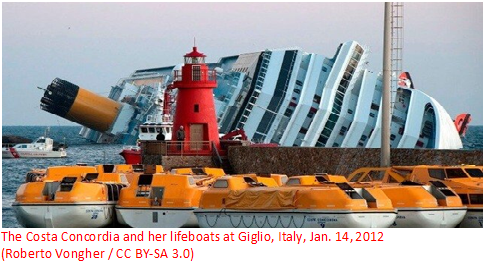 At about 2145 hours on January 13, 2012, the cruise ship Costa Concordia ran aground on a shoal just off Giglio, damaging her hull. In a maneuver described later as a “salute” to a retired cruise line commodore, Capt. Francesco Schettino had brought the Costa Concordia close in to the island - too close. When she struck bottom, flooding disabled the main engines and she drifted in to shore, eventually coming to rest on the rocks.

This set off a chaotic evacuation of 4,229 passengers and crew, and while most survived, 32 people died in the minutes and hours that followed.

In 2015, Capt. Schettino was convicted of multiple counts of manslaughter and sentenced to 16 years. Investigators severely criticized his handling of the disaster, accusing him of delaying evacuation and abandoning ship before all the passengers and crew had been rescued.

The vessel herself took years of effort and $1.4 billion in funding to refloat

The vessel herself took years of effort and $1.4 billion in funding to refloat remove and demolish. It was the most sophisticated and complex salvage operation ever attempted, and the record for cost still stands.

On Wednesday evening, a group of survivors and residents walked down to the pier in Giglio's harbor in a candlelight procession. At 2145 hours local time, they placed a wreath at the pier and held a prayer vigil as church bells rang out to commemorate the 32 people who lost their lives that night.