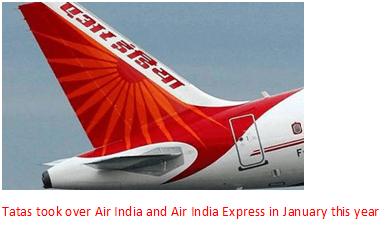 In a bid to consolidate its aviation business under one umbrella, Tata Sons has taken the first step to merge Air India with Air Asia. Air India, which was recently acquired by the Tata group, has approached the Competition Commission of India (CCI) for acquiring 100 per cent stake Air Asia India.

As per a notice filed with the CCI—“The proposed combination relates to the acquisition of the entire equity share capital of AirAsia India by Air India – an indirect wholly-owned subsidiary of Tata Sons (TSPL).

At present, TSPL holds 83.67 per cent of the equity share capital of Air Asia India.”

Tatas had recently raised its stake in AirAsia India to 83.67 per cent in December 2020. AirAsia India, which started flying in June 2014, offers scheduled air passenger transport, air cargo transport and charter flight services in the country. It does not have international operations.

“The proposed combination will not lead to any change in the competitive landscape or cause any appreciable adverse effect on competition in India, irrespective of the manner in which the relevant markets are defined,” says the notice.

. In October 2021, Tatas emerged has the winning bidder for loss-making Air India. It offered a bid of ₹18,000 crore, comprising cash payment of ₹2,700 crore and taking over the carrier’s debt worth ₹15,300 crore.

Vistara not in merger plan

Tata group also controls Vistara Airlines but so far this company has kept out of the merger plan. According to sources, Singapore Airlines, which is a joint venture partner in Vistara, may not want to have a stake in the combined Air India as it competes with the Indian airline on international routes.  Air India, Vistara and Air Asia have a combined market share of 26.9 per cent, making Tata Group the second-largest domestic airline company after IndiGo .

““Given the strong financial flexibility, availability of a larger fleet and multiple brands catering to different customer segments, the Tata Group is likely to have a competitive advantage over other players. However, the ability to optimise costs, and streamline operations will be a formidable challenge and the key to profitability in the group’s airline operations,” said an expert.