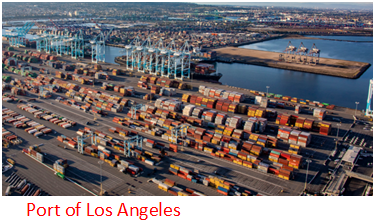 China's firm policy on the Covid-19 pandemic has created a climate of port closure and operational restrictions, as seen in both Ningbo and Shanghai, according to the latest Sea-Intelligence report.

The Danish analysts said that if we take the Chinese New Year as a parameter, these restrictions will probably have reduced some burden on the volume flows from China, but at the same time will have created additional backlogs

"In order to make possible the visibility of the changes for the ports of the West Coast of North America, in the first quarter of 2021, we must visualise the changes without unduly distorting the picture due to the instability in 2020-2021," said Sea-Intelligence.

On an annual basis, the laden inbound volumes contracted heavily in the second half of 2021, but the annualised growth over 2019 shows that this is more an artefact of strong 2020 second half growth.

"This spike in March 2022 is possibly a result of the backlog that was cleared after the port closure of Ningbo earlier in the year and then Chinese New Year that followed, as well as the initial operational restrictions in Shanghai more recently," commented Alan Murphy, CEO of Sea-Intelligence.

At the same time, although carriers continue to prioritise empty container exports from the West Coast of North America, growing at a rate of about 20% in the last 18 months, in January-March 2022, cargo exports shrank at a rate of 5%-10% slower, compared to 10-15% observed in the second half of 2021.

Perhaps this is because the closing of the port of Ningbo for 14 days in early 2022 resulted in a pile of empty containers in the port, containers that had been unloaded before the port closed and had since been emptied.

"It is possible that the carriers deemed that level of empties as sufficient for the time being and therefore cleared out some export cargo from the North America West Coast ports," added Murphy.