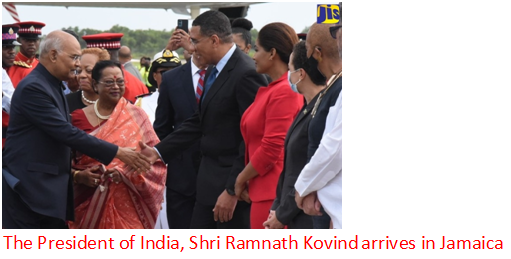 President of India in Jamaica

The President of India, Shri Ramnath Kovind, landed at the Norman Manley International Airport, Kingston, Jamaica in the evening of May 15, 2022, where he was received by Governor General of Jamaica, H.E. The Most Hon Sir Patrick Allen, Prime Minister of Jamaica, H.E. Andrew Holness and other dignitaries. The President was accorded a guard of honour on his arrival.

This is the first ever visit of an Indian President to Jamaica which is taking place in the 60th anniversary year of the establishment of diplomatic relations between the two countries.

Yesterday (May 16, 2022), the President commenced his engagements by visiting the National Heroes Park in Kingston to pay his tributes to Marcus Garvey. Subsequently, he visited King’s House- the official residence of the Governor General of Jamaica - to meet Governor General Sir Patrick Allen. During the discussion, the President thanked the Governor General for the warm welcome and hospitality. The two leaders discussed bilateral cooperation in the field of IT and related services, medical and pharma sector, sports and education, tourism and hospitality industry and development partnership.

The President noted that there is steady growth in bilateral trade and economic and commercial interactions between India and Jamaica despite the disruption caused by the COVID-19 pandemic.

The concept of South-South Cooperation

Speaking about development partnership and education between the two countries, the President said that India remains steadfast in its commitment to share its experience, knowledge and skills acquired in its development journey, with fellow developing countries such as Jamaica. Our development partnership activities are firmly rooted in the concept of South-South Cooperation and based on the principles of voluntary partnership in line with national priorities of our partners… India is happy to offer an increase in ITEC slots from 30 to 50.

The President said that there is huge potential for collaboration in the service sector and knowledge economy between the two countries. He was happy to note Jamaica’s interest in collaboration in the field of education, especially among educational institutions. He said that India welcomes Jamaica’s interest in hosting a branch of an Indian educational institution in one of its universities.

Following the meeting, the President and Prime Minister Holness witnessed the signing and exchange of anMoU between Sushma Swaraj Institute of Foreign Service (SSFSI) and Ministry of Foreign Affairs and Foreign Trade of Jamaica on cooperation in the field of diplomatic training. This MoU will also facilitate close academic and training exchange for Foreign Service officers of Jamaica in the SSFSI.

Subsequently, the President visited Downtown Kingston where he inaugurated Ambedkar Avenue...the President said that Dr Bhimrao Ambedkar introduced progressive ideals for the social and economic empowerment of the depressed classes in the Constitution. He educated and inspired the people for the goal of removing inequality.

In the final engagement of the day, the President attended the Indian Community and friends of India Reception hosted by Shri Masakui Rungsung, High Commissioner of India to Jamaica.

We are very proud of the achievements of the Indian community in Jamaica.

The President said that India is celebrating 75 years of India’s independence and the glorious history of its people, culture and achievements through ‘Azadi Ka Amrit Mahotsav’. He urged members of the diaspora to come forward and join in the celebration.