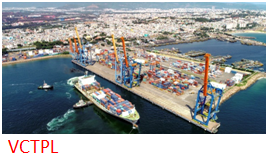 The Visakhapatnam Port Authority has announced the expansion of its container terminal that has the deepest natural depth of 16 metres.

The expansion undertaken at a pre-revised cost of Rs 633.11 crore by the BOT operator JM Baxi Group enables the terminal to handle a small vessel and two large liners of 350 metre length with a capacity of 20,000 teus.

“The container terminal after completion of expansion adds our capacity and will enable us to improve our ranking in future by attracting more import and export cargo,” VPA Chairman K Rama MohanaRao said recently.

VPA is also gearing up to face competition amid reports that a nearby private port is also making efforts to foray into container business. VPA has already focused on expanding its client base with the introduction of end to end logistics solutions.

Exim at the terminal