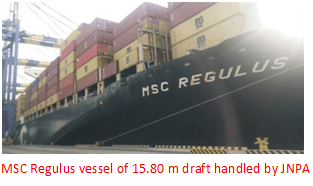 Jawaharlal Nehru Port Authority (JNPA) recently added another feather in its cap by handling mv MSC Regulus vessel of 15.80 m draft, which became the Deepest Draft vessel to be handled by JNPA till date. The vessel was proficiently piloted by

Capt. Manish Kumar, informed a recent communiqué of the Port.

The Jawaharlal Nehru Port Authority (JNPA) at Navi Mumbai is the Premier Container handling port in India, accounting for around 50% of the total containerized cargo volume, across the Major Ports of India.

Commissioned on 26th May 1989, in three decades of its operations, JNPA has transformed from a Bulk- Cargo Terminal to become the Premier Container Port in the Country. JNPA is connected to over 200 ports in the World.

JNPA has also developed a Multi-Product SEZ in its owned free hold land of 277 hectares to attract international capital and global giants in manufacturing. In addition, the JNPA is also developing satellite port at Vadhvan and 4 Dry Ports – Jalna, Wardha, Sangli and Nashik to promote industrialization of the hinterland.

JNPA has firmly anchored itself as the major catalyst for the trade and commerce in the Country and is strongly committed to providing seamless services to the World that dock here.