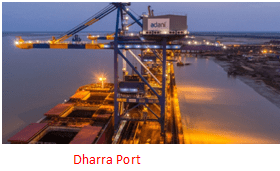 The aim is to develop Dhamra Port as the Mundra of the east coast, a leading multi-cargo gateway with excellent road and rail connectivity to the hinterland, emphasise senior officials of the facility.

Currently mainly handling bulk and break-bulk, this objective will be further facilitated by an upcoming LNG terminal as well as a proposed container terminal, besides industrial zones planned by the Odisha government in the vicinity that are expected to significantly add to cargo volumes.

The Dhamra Port Company Limited (DPCL) is a 100% subsidiary of Adani Ports and SEZ. DPCL took charge of the port in 2011 after it was awarded a concession by the Government of Odisha to build and operate a port north of the mouth of river Dhamra in Bhadrak district on Build, Own, Operate, Share and Transfer basis for a period of 34 years.

Operations at the port are marked by a quiet efficiency, as this correspondent witnessed recently, with its mechanised coal handling facility proficiently going about its job, mounds of commodities waiting to be loaded or unloaded, and cargo rakes moving in and out.

Construction of the LNG terminal is on in full swing, besides other developmental works, which all portend to greater things to come. Dhamra may today be relatively low profile among Adani Group ports but one can expect a completely changed scenario in 2-3 years, the officials underscore.

Coal, limestone and steel are among the major commodities currently handled at the deep-draft (16 m) port. Its total throughput in 2021-22 was 35 million tonnes and the target for this fiscal is 40 million tonnes.

Two key projects expected to take the facility to new heights are the LNG and container terminals, which are in vastly different stages of development. The LNG terminal, a joint venture with French energy major Total, is projected to be commissioned in October this year. The Dhamra LNG import and regasification terminal has been designed for an initial capacity of 5 million tonnes per annum (MTPA), expandable up to 10 MTPA, and will initially have two full containment type tanks of 180,000 cubic meters capacity each.

Once completed, Dhamra LNG will be the second LNG terminal in operation on India’s east coast and the country’s seventh LNG terminal.

The facility’s jetty will be capable of handling LNG carriers from 70,000 to 265,000 cubic meters capacity. It will also offer break-bulk services, enabling reloading of LNG to smaller vessels for further distribution, and includes an LNG truck loading facility, as per a Total communique.

Overall, as per APSEZ, Dhamra is an all-weather, multi-user, multi-cargo port that is poised to become the largest and most efficient port on the east coast of India. Capable of handling the biggest of vessels, this facility, situated between Haldia and Paradip, is in close proximity to the mineral belt of Odisha, Jharkhand and West Bengal and offers deepened hinterland connectivity and operational efficiency.

The port has covered and open storage areas with enormous capacity, excellent cargo evacuation and receiving infrastructure, as well as expertise in successfully handling oversized and overweight project cargo.