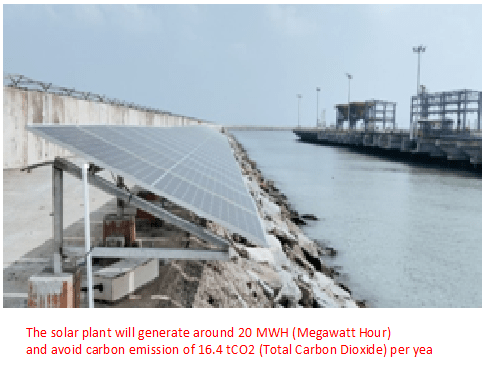 For the first time in the history of the Indian port industry, Kattupalli Port has utilized the breakwater rock area for the installation of an on-grid solar generation plant, with an installed capacity of 15KWp.

The solar plant will generate around 20 MWH (Megawatt Hour) and avoid carbon emission of 16.4 tCO2 (Total Carbon Dioxide) per year

. It has about 34 number of 450 watts capacity solar modules, each designed with mono PERC technology, which requires lesser area for installation. These solar modules fitted on elevated cantilever structure are designed to withstand adverse weather conditions and windstorms.

The port plans to extend this project to a 700 Kwp (kilowatts peak) solar generation plant, which would cover the entire 2 Kms of North Break Water. The plant will generate around 900 MWH (Units) and avoid carbon emission of 738 tCO2 per year.

The target is to complete this project by the end of July 2022.

The plant marks an important mile-stone on a green path towards achieving zero carbon emissions. The green energy generated from the on-grid solar generation plant will be used to charge the batteries of electric vehicles, which will be deployed at the port soon. The port is well positioned to do this because of its unique location–it is located 30 kilometers towards north of Chennai and has connectivity with the hinterland of North Tamilnadu, Chennai, Bangalore region and South Andhra Pradesh. All these locations are highly industrialized.

Speaking on the development, SPOKESPERSON from Kattupalli Port said, “We have made history by installing an on-grid solar plant on the break water rock area. This is the first time that such a plant has been built in the country. The plant fits in with our larger and long-term plan of making Katupalli port, one of the most sustainable ports in southern India.”

Kattupalli Port, part of Adani Ports and Logistics, is one of the most modern ports in India, emerging as Chennai’s New Gateway for EXIM trade in the Chennai and Bangalore region.

With a backup area of 322 acres, the port provides ample space for future expansion of port to facilitate trade requirements. Adani Ports and Special Economic Zone plans to transform Kattupalli into a multi commodity port to handle cargoes such as containers, automobiles, break bulk, general cargo, liquid cargo and project cargo. Presently the port has three berths with quay length of over 1000 meters, 7 Quay cranes, 18 RTG cranes, 5120 ground slots with the capacity to handle 1.4 million TEUs per annum.