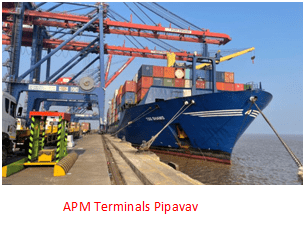 APM Terminals Pipavav (Gujarat Pipavav Port Ltd) on Thursday  19 May reported a 10 per cent rise in net profit at Rs 72.4 crore for the quarter ended March 31, 2022.

The private port operator had recorded a net profit of Rs 65.4 crore in the corresponding quarter of fiscal year ended March 2021, according to a company statement.

Earnings before interest, taxes, depreciation, and amortization (EBITDA) for Q4FY22 was at Rs 129 crore, up 12 per cent, as compared to Rs 115.6 crore in the same period of FY21, it stated.

Revenue from operations during the year stood at Rs 743.5 crore, logging a 1 per cent growth over FY21.

The container cargo business for the year stood at 628,000 TEUs, while the bulk business was 4.19-million MT, it said.

The liquid business from the port was recorded at 0.81-million MT, the release said, adding that during the period the port also handled 23,874 cars under the Ro-Ro category.

Ro-Ro is short for ‘Roll-on, Roll-off’, which describes how products are loaded and discharged from a vessel.

Besides, the Port also secured new services, expanding its footprint in the global markets and the port handled 77 export double stack trains originating from the North West hinterland of India in March 2022, which is the highest ever inward trains managed at the port in a month.