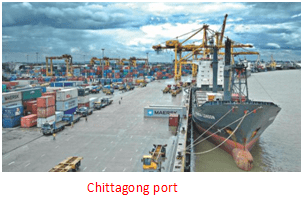 Tripura may use Chittagong port to transport essentials

Tripura government is contemplating to transport essentials into the state through Chittagong port in Bangladesh in view of the possible shortage of food stuff and fuel due to the snapping of railway services in the ongoing flood and landslips in Assam, an official said on Wednesday 18 May.

There has been no confirmation over the restoration of train service through Lumding-Badarpur section in Assam which has been majorly affected by landslides triggered by incessant rain, principal secretary to the Tripura transport department, L H Darlong said at a press conference.

The Assam-Agartala national highway has opened for vehicular movement from Wednesday after a brief halt, he said.

“Even though the Assam-Agartala national highway is opened for vehicular movement, disruption in train service for a long period will have an adverse impact on the normal supply of essential items to Tripura. That is why we are planning to bring essentials by using an alternative way – the Haldia- Chittagong-Akhaura-Agartala transhipment route to transport essential items on an emergency basis,” he said.

The coastal route of Haldia-Chittagong- Akhaura-Agartala, inaugurated in July 2020, is 600 km.

Darlong said as of now Tripura has a rice stock for 43 days, wheat for 38 days, sugar for 28days, besides pulses and vegetables.

But the stock for petrol will only last for eight days and diesel for five, which is a matter ofconcern, he said.

The state has already requested the Food Corporation of India and Indian Oil Corporation Limited to ensure normal supply.

Additional secretary to the food and civil supplies department, Tapan Kumar Das said “IOCL has already started sending petrol and diesel to Tripura through tankers from Guwahatiand Silchar to prevent the possible shortage of fuel”.

In view of the situation, the Tripura government has restricted the selling of petrol. Two wheelers can buy petrol of maximum Rs 200, three wheelers for Rs 300 and four wheelers for Rs 1000. A litre of petrol costs Rs 108.26 in Agartala.

There are, however, no restrictions on the sale of diesel but many of petrol pumps here have downed shutters in the capital town as they have run out of reserves.