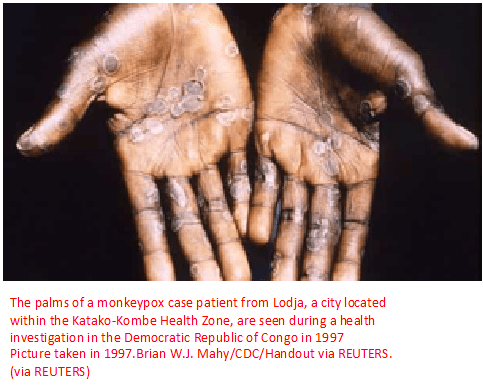 Monkeypox outbreak: WHO to call emergency meeting amid rise in cases. Details here

The meeting's agenda is believed to be the ways of the virus' transmission, its high prevalence in gays and bisexual men, as well as the situation with vaccines.

The World Health Organisation (WHO) Infectious Disease Epidemiologist; Covid-19 Technical Lead, Emerging Diseases and Zoonoses Lead, WHO Health Emergencies Programme, Maria Van Kherkove on Friday 20 May informed that an emergency meeting would be convened keeping in mind the emergence of the Monkeypox cases.

Monkeypox is a viral zoonosis

The Monkeypox is a viral zoonosis that has been detected in a total of seven persons till now in the United Kingdom. Four news cases were detected, as per the UK Health Security Agency bulletin.

WHO also informed that they are working with member states and partners to better understand monkeypox circulation in endemic and non-endemic countries.

Monkeypox is a rare but potentially serious viral illness

"Monkeypox is a rare but potentially serious viral illness that typically begins with flu-like illness and swelling of the lymph nodes and progresses to a rash on the face and body. Most infections last 2-to-4 weeks. In parts of central and west Africa where monkeypox occurs, people can be exposed through bites or scratches from rodents and small mammals, preparing wild game, or having contact with an infected animal or possibly animal products," WHO's statement reads.

On 7 May, a case of monkeypox has been confirmed in England, in a patient who recently travelled from Nigeria, as per the UK Health Security Agency. On 18 May, the US' Massachusetts Department of Public Health confirmed a single case of monkeypox virus infection in an adult male with recent travel to Canada.

The illness could be clinically confused with syphilis

According to WHO's statement, suspected cases may present with early flu-like symptoms and progress to lesions that may begin on one site on the body and spread to other parts and the illness could be clinically confused with a sexually transmitted infection like syphilis or herpes, or with varicella zoster virus.

According to WHO, Monkeypox mainly occurs in forested rural areas in central and Western Africa. Since the cessation of smallpox vaccination, the rising incidence of reported cases and outbreaks are raising concerns about the future spread of the disease.