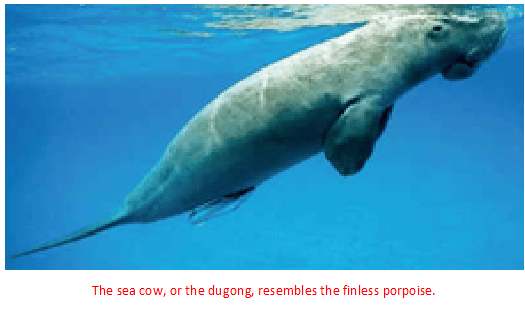 It’s official. The sea cow exists along the coast in neighbouring Gujarat. A team of researchers has just confirmed this with photographic evidence to back its claim of the viable population of the marine mammal thriving in Gujarat. This comes days ahead of World Dugong Day which is celebrated on May 28.

The sea cow, or the dugong, resembles the finless porpoise.

It is the only herbivorous (seagrass-eating) marine mammal in the world.

The latest visuals of the dugong’s existence have brought cheer to the Gujarat state forest department, said researcher PrachiHatkar from Wildlife Institute of India, which has been studying the sea cow in Gujarat for the past five years.

The sea cow exists in Gujarat

Another researcher, SagarRajpurkar, conducted drone surveillance of the dugong swaying under water in the Kutch region last December, conclusively proving that the sea cow exists in Gujarat. Local fishermen had reported sightings in the area

Four years ago, carcasses of three dugongs had beached along the Gujarat coast, but this is the first time that photographic evidence of a live dugong there has come to the fore, states a research paper put out by the team. A research scholar from Gujarat had in the past documented their presence in his thesis. Sea cows exist along the Tamil Nadu coast, and around the Andaman and Nicobar Islands.

The research team, also comprising SameehaPathan, Shivani Patel, Gem Christian, and UzairKureshi, is working towards understanding dugong biology and other aspects of its life, with Dr J A Johnson and Dr K Sivakumar as guides. The project is partnered by the ministry of environment and climate change. Principal investigator of the project, Dr J A Johnson, termed this first-of-its-kind photographic evidence an “encouraging result”. This was reiterated by R SenthilKumaran, deputy conservator of forests, Marine National Park, Jamnagar, who said that the “breakthrough achievement” will buoy the forest department to conserve the dugong population in the region.

Dugongs often surface during high tide to feed on seagrasses.