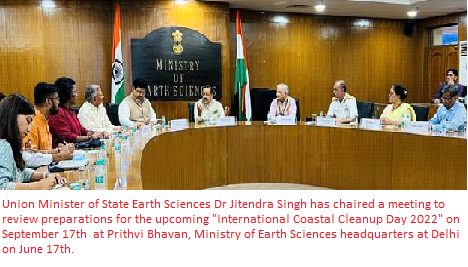 The Coastal cleanup drive will be carried out in as many as 75 sea beaches across the country for 75 days from July third to September 17th as part of the International coastal-clean up day 2022,  Union Minister for Earth sciences Dr Jitendra Singh said.

The target of the drive is to remove 1,500 tons of garbage from the sea coasts which will be a huge relief to marine life and the people staying in coastal areas.

Talking about the uniqueness of this year’s event, Dr. Jitendra Singh said that it will be the first-of-its-kind and longest running coastal cleanup campaign with highest number of people participating in it. He said that the participation of common man is essential to convey the message of prosperity of not only coastal areas but also other parts of the country.

Dr. Jitendra Singh also suggested that other than coastal regions, non-coastal regions should also plan to disseminate the message to the local

The annual event dedicated to the cause of cleanliness

The Union Minister said that the annual event, which is organized on September  17th this year is dedicated to the cause of cleanliness (Swachhta), Sea beach protection, environment and climate protection in all its forms.

The Union Minister previewed the logo ad tag line for the day and other thematic aspects related to it. He also directed the officials involved for blitzkrieg of pre-event activities in the run up to the main event.

The 75-day long event will start on July 3rd with the release of brochure and a media interaction. There will be formal launch across the country, more so in the coastal States, with opinion makers and celebrities attending the local events.

The meeting was attended by DG, Indian Coast Guards, senior officials of the Ministry of Earth Sciences and other organizations which are involved with hosting the event.