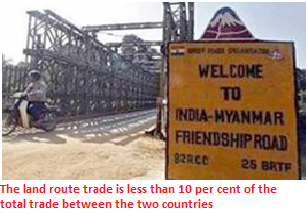 India, Myanmar land route trade likely to reopen after a gap of 2 years

After a gap of over two years, India and Myanmar are likely to resume trade through the land route.

“When Covid struck the land route trade was stopped. However, the sea and air routes continued. Since the past few weeks, there have been talks between the ministry of commerce and Myanmar and its been decided in principle to reopen the land route for cross-border trade,’’ according to sources.

Trade is likely to resume from Moreh (110 km from Imphal, Manipur) Tamu border

A formal notification on resumption of trade is awaited and could come through any day now, say sources.

The governments of both countries had set a target of achieving $1 billion in bilateral trade five years back, however, Covid, followed by the Myanmar military coup in 2021 has delayed achieving this target.

While Myanmar is one of the largest exporters of pulses and beans to India, India exports mostly pharma products to them.

Myanmar is strategically located for India as they share a land border of over 1643 kms with Myanmar as well as a maritime boundary in the Bay of Bengal. Four northeastern states Arunachal Pradesh, Nagaland, Manipur and Mizoram, have a boundary with Myanmar.

“India shares religious, linguistic and ethnic ties with Myanmar which is the only ASEAN country adjoining India and, therefore, is a gateway to South East Asia. India is seeking to enhance its cooperation with Myanmar in line with our ‘Act East’ and ‘Neighborhood First’ Policies, according to the Ministry of External Affairs.

Interestingly, the land route trade is less than 10 per cent of the total trade between the two countries as majority of exports and imports is done through sea route and by air. Once trading from Moreh resumes, India will begin to pitch again for pushing the proposed 1360 km India-Myanmar-Thailand trilateral highway.