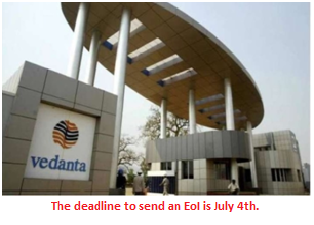 Vedanta puts its copper smelter plant in Tuticorin on sale

The deadline to send an EoI is July 4th.

In collaboration with Axis Capital, Vedanta has issued a request for proposals. In May 2018, 13 people were murdered and 102 others were injured in a police shooting in Thoothukudi during a demonstration against the plant’s development. The smelting and refining plant was shut down as a result.

The production standstill at Sterlite Copper’s Thoothukudi facility costs the Indian government more than $1.2 billion in losses, according to the company.

Around 120,000 people were affected due to the closure and nearly 400 MSMEs were affected as they were dependent upon products like copper, sulphuric acid, and fluorosilicic acid. According to an estimate, the area was suffering a loss of around Rs 700 crore per annum due to the shutdown.

The plant used to produce approximately 40 per cent of India’s demand for copper and contributed around Rs 2,500 crore to the exchequer, 12 per cent of Thoothukudi port’s revenue, and 95 per cent market share of sulphuric acid in Tamil Nadu.

The copper smelter, with a capacity of 400,000 metric tonnes per annum (MTPA), was contributing a larger share of the country’s demand for refined copper and included a refinery and copper rod plant, a sulphuric acid plant of more than 12,00,000 million tonnes per annum (MTPA) and a phosphoric acid plant of 220,000 MTPA. It also had a 160 mega watt (MW) coal-based power plant to power the copper smelter.