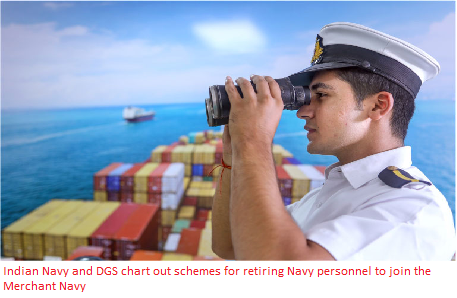 Govt prepares ground for transition from Navy to Merchant Navy

Navy has signed a Memorandum of Understanding with the Director General of Shipping outlining as many as sixteen transition schemes for the retiring naval personnel to join the Merchant navy.

Some of the key highlights of the transition schemes are: It caters for transition of personnel involved in Engine Room work on Naval Ships that is from rating to artificers to Engineers and also provides option for those working on electrical duties as well as mechanical engine duties. It caters for equivalent transition with minimum bridge courses, sea-service & examination of those who during their tenure with Indian Navy have reached a certain position but were unable to gain step by step STCW Certification.