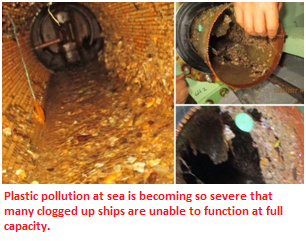 Graeme Somerville-Ryan, the founder of the ocean plastic mapping initiative Eyesea, has detailed via LinkedIn how a number of contacts have been in touch over ships struggling to operate as plastic builds up in various parts of onboard machinery.

Citing one example with pictures (see above), Somerville-Ryan showed how a container vessel was unable to proceed at full speed nor operate a full reefer container capacity due to overheating from clogged cooler strainers.

The ship pictured was trading from South Asia to the Gulf at the time.

Somerville-Ryan told Splash he has since been contacted by a number of shipping contacts who have reported that this is a regular and increasing problem.

The problem is felt most acutely off the coast of East Africa, he reported.

In a long thread following Somerville-Ryan’s post, one assistant engineer commented: “This phenomenon of coolers getting clogged by plastic and other garbage more frequently closer to ports is only getting worse in certain parts of the world.”

Ports in Southeast Asia were also deemed a hotspot for plastic pollution by readers of Somerville-Ryan’s post.

Somerville-Ryan founded Eyesea two years ago to map and track plastic in the world’s oceans, getting shipping companies, seafarers and the general public onboard.

Eyesea has now collected over 120,000 data points from over 65 countries and territories.