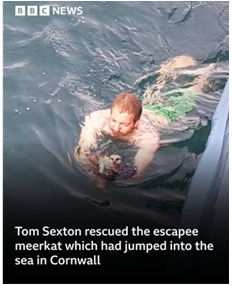 It is not very often that you hear a tale about a captain that dives overboard to rescue one of his wayward “passengers” from the sea, but the BBC is reporting just such a tale today. What’s more, the passengers were the four-legged kind but both owner and captain feared the creature might not be able to swim leaving little choice but to stage the unusual rescue.

Tom Sexton took command of the small cargo ship the Gry Maritha in April after the vessel’s senior captain retired in the spring after 22 years with the Isles of Scilly Steamship Company.

Last week during one of her regular runs she boarded two unusual passengers, meerkats that were being transported by their owner on their way to a zoo in Axminster, Devon, England. Named Doris and Boris, the animals which weigh less than two pounds were caged for the trip from the Isles of Scilly.

Somehow when they were arriving in Penzance, the animals got free and were running around the deck of the little cargo ship.

The crew was able to catch Doris, but much to the dismay of their owner, Boris decided to make a break for it and went over the side of the ship down 10 feet into the harbor. Owner Stephen Griffin told the BBC that he did not think the meerkat could swim, but Captain Sexton said he saw the animal swimming about but realized it had no way to get back aboard the ship.

Sexton quickly changed into a pair of boardshorts and put on a pair of gloves to prevent the animal from biting and he dove in after his wayward passenger. At the same time, the crew tied a cage to a rope and lowered it over the side. Recounting his tale to the BBC, Sexton said it was "easier" than he thought it would be, saying that the animal "was quite glad" to be caught and back on dry ground.

The captain laughs it off going back to his job of moving vital supplies to the islands.